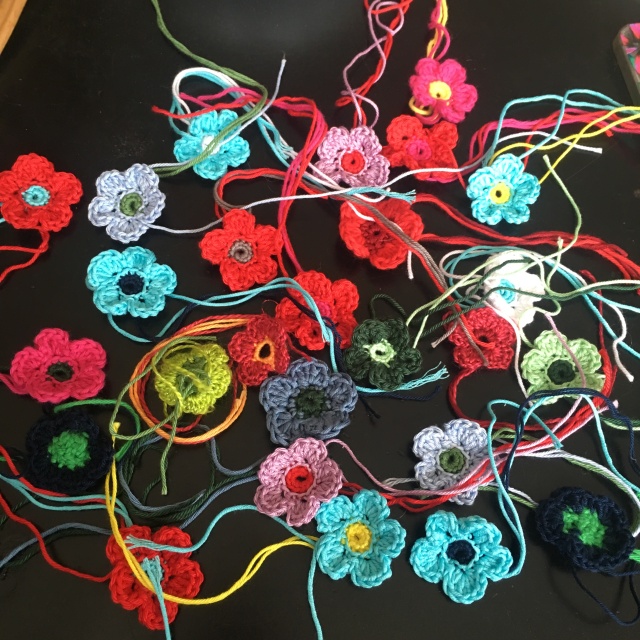 These will be a bunch of embellished hair ties once I’m done with them – and I hope they will sell well at the Summer Fayre in June. In case you like the idea and wonder how to make them, can I direct you to this post where I’ve tried to explain how to go about it?

To make the embellished hairties, I 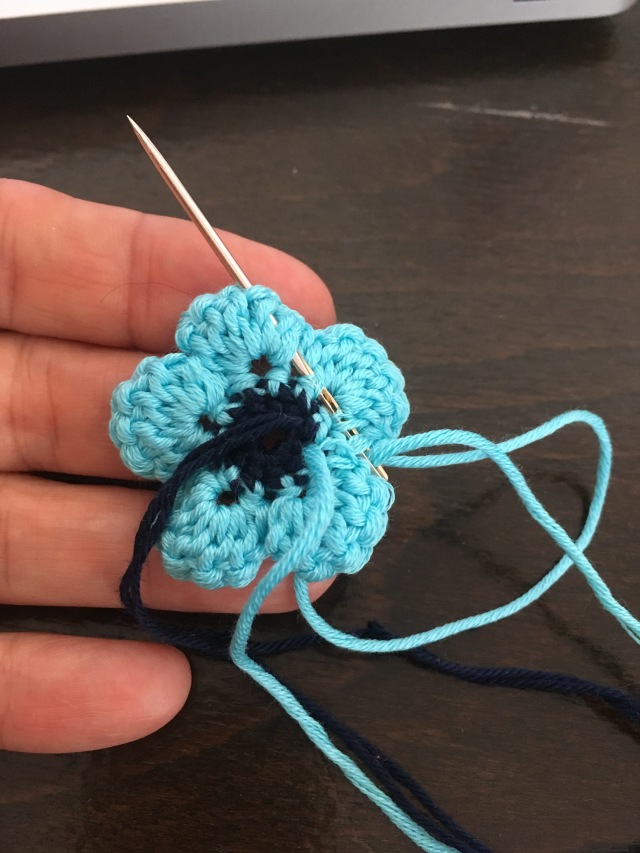 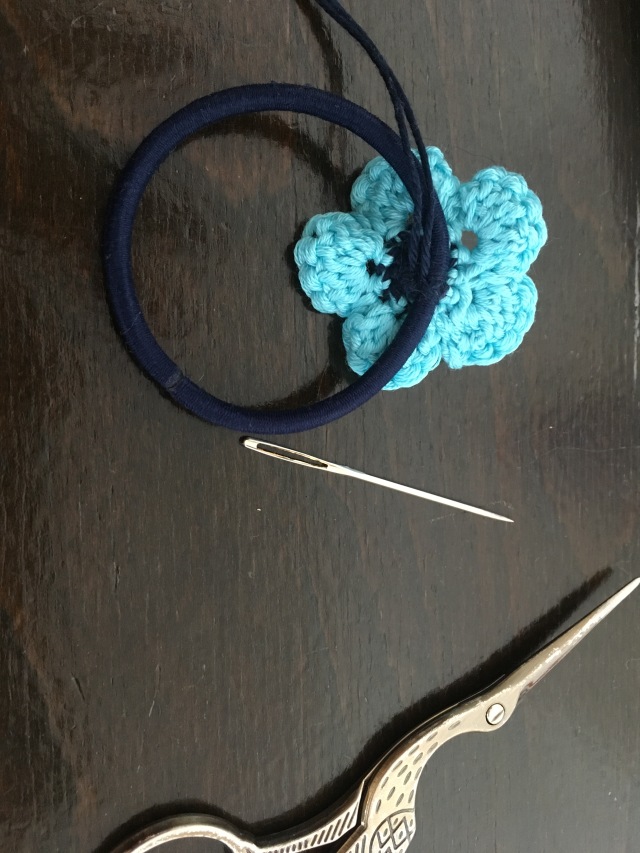 – tied the other two securely around a hairtie that seems to fit, made three knots, and then darned in the two leftover threads (navy blue). 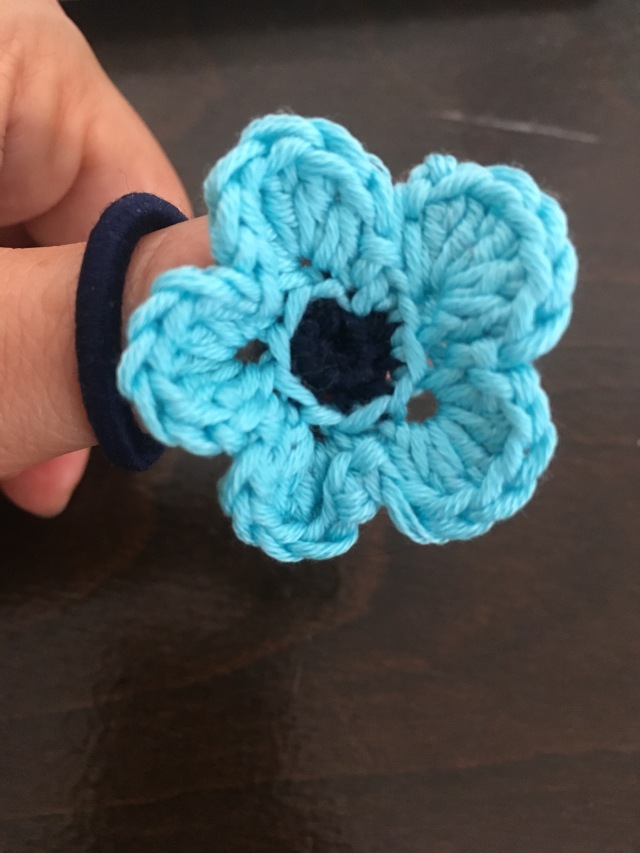 Tadah, a nice, summery little flower hairtie made. If you want to go all in, you can additionally put a small blob of hot glue in the back, to further secure the darned in threads and increase the general longevity of the item. As a mom of a notorious hairtie losin‘ li’l lassie, however, I can tell you now you best be Zen about the thing not being around for long anyway, so it may not even be worth the trouble.

When I began making the flowers last Saturday at the school crafternoon, I had a number of enthusiastic helpers, some very young and some my age. Watching excited and inquisitive Charlie while showing the helpers the moves _and_ trying to get some crocheting done myself was challenging to say the least, and I confess I was WIPED afterwards.

It always takes a pound of flesh out of me to deal with groups of people (I’ve said more as to why already). It helped that I didn’t have more than 3 people at my table at a time. But suffice it to say that I am just not cut out to be a teacher, even though people always say I have a knack for explaining. Ultimately, I’m just a very polite person, I guess :-).

Crafts stuff aside, taking in young Charlie has required me to make a few changes. Life has taken a different turn in ways I hadn’t anticipated, and accommodating the pup’s needs has forced me to prioritize, much like I had to when I had my son in the early aughts.

Despite all the endorphins (the dog makes me sooo happy), my resilience is far from infinite. In fact, one night last week, I completely lost it. I was having a bit of a day. I drove my daughter to hockey practice only to learn I wasn’t supposed to bring Charlie to the grounds at all. So we took a long walk around the neighborhood until it started raining and we ended up waiting in the car. I had forgotten to eat, so I was hangry when we came home, and I yelled at the kids for not helping with chores. I felt a surge of guilt because I had literally no time for the kitty anymore because, possessive dog, hello! And then of course I was feeling guilty for snapping at the kids for being lazy sumbitches, because I felt it was me who made them inconsiderate because I spoil them, doing stuff for them all the time. The dog was whining and scratching my bedroom door to get out to where the action was (kitty and my son’s friends watching GoT in the family room). Finally, I was really tired, but not allowed to go to sleep yet because nighttime walk, duh. So, I had a quiet and tearful meltdown. After a while, I called my husband who was a sweetheart and talked me down, and when my sobs had ebbed away, the pup came and licked my face, which made me smile again. But it was clear that something would have to give…

You may not be surprised that the something ended up being the hockey club. It’s no secret I’ve always had mixed feelings towards it – we became members at our daughter’s request, even though it was a bit cumbersome what with shuttling her to practice twice a week. There were jerseys and equipment to be bought, which we did, and parents meets to be attended, which we failed to do. When after a while it became clear that while she enjoyed practice, she didn’t really like the games, I was beginning to feel like a hypocrite trying to get her to be in the weekend tournaments. So after my little episode, we had a heart to heart with her and decided that this membership needed to come to an end. Writing the resignation letters felt like such an enormous relief, I can not even tell you.

Meanwhile, I’ve written to a dog trainer who seems nice, and hope she can pencil us in before the summer break. Leaving here today with a few pics that show I’m not the only person who loves this little dog :-). 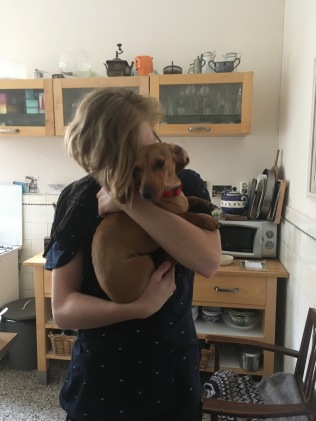 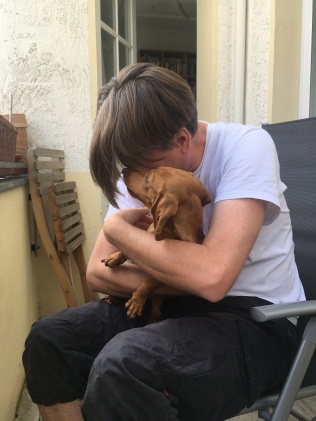 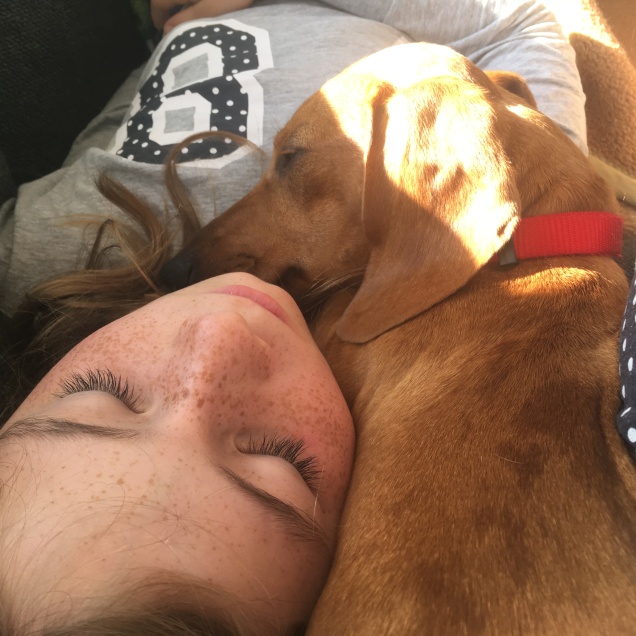 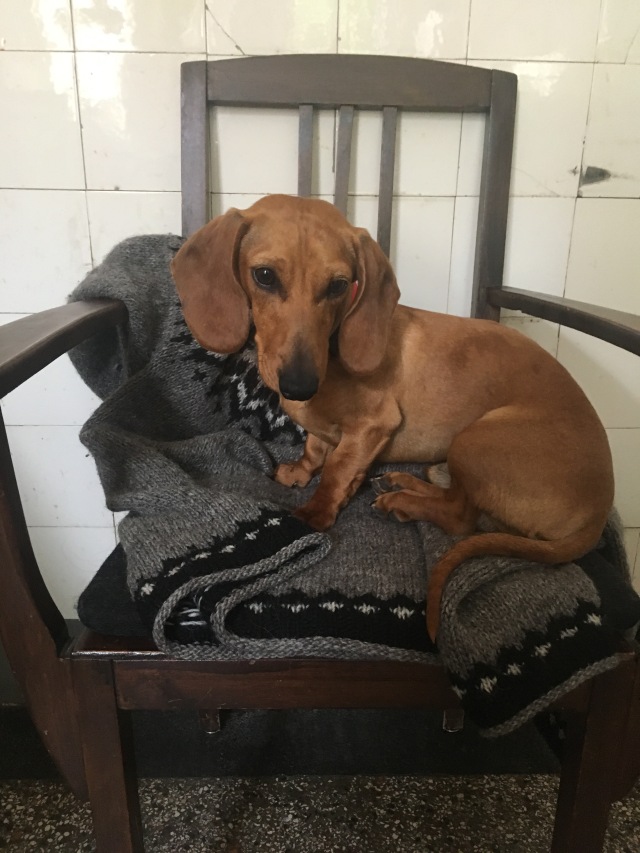 Here’s a survey for you: Are you a cat or a dog person? And do you feel liking one or the other is mutually exclusive? Apparently, that’s a thing, and I’m asking for science.

As you can see, we’ve gone and done it – as of Friday last week, Charlie has officially moved in. I’m completely smitten, as is my daughter, my son loves him despite himself (he was adamant his loyalties were always going to be with Her Majesty Fritzchen the Kitty, but even he has succumbed to those eyes). My husband is not quite as invested in Charlie yet, but I’m sure he’ll win him over, eventually. Not sure whether the kitty will ever really like him, but so far they haven’t killed each other yet, which I call a win, and I’m hoping the vet is right and they will reach a sort of an armistice at some point.

I had many thoughts and feelings before we went to get the pup. Mostly, I was afraid he wasn’t going to be happy with us, that he’d miss his folks and the other dogs he lived with, that he’d hate living in the city. Interestingly, none of those things have come to pass.

Instead of crying for his old family, he immediately latched on to me like a touch-starved little baby sloth. I was reminded of Armie Hammer’s impersonation of a lovesick puppy in ‚Mirror, Mirror‘, after Julia Roberts (aka Evil Queen) accidentally feeds him the wrong kind of love potion (puppy love, duh) instead of the one that was supposed to make him fall madly in love with her, as his own true self. Check it out, it’s on YouTube, it’s hilarious, and eerily accurate. It feels a bit like that (and yes, I realize Armie Hammer’s prob 20 times the size of my mini Wiener dog). My point is, Charlie looks at me like I hung the moon, he insists on coming with me everywhere I go (bathroom included) and he’s basically happiest when he can lie, or sit, on some part of me. I must confess we let him sleep in our bed the first night because we felt sorry for him, and that kind of was that. Smart dog burrowed under my husband’s covers first (flattery will get you everywhere, right?) before moving under mine, and staying there.

Taking walks 5 times a day is nice, even though I have to say that the late night pee trip to that one apparently enchanted tree on the street corner is not much fun when I’m already exhausted by ten p.m. – but the alternative is a smelly mess early in the morning, can’t have that. So, instead of my usual routine of working until I get tired and then going to bed, I’ve started watching ‚Brooklyn 99‘ in the evenings to pass the time – thank God for Netflix!

So, conclusion after the first week: I have a dog now, and I couldn’t be happier :-). 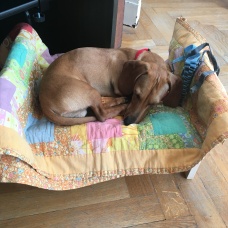 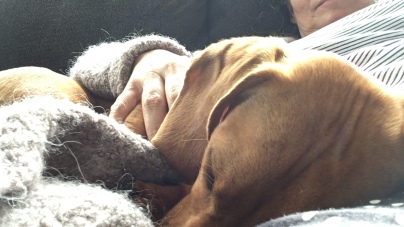 Those of you who live in town – come take walks with us :-).