This year, I was the Wicked Witch of the East for Halloween without even realizing. We were in a rush to get out the door, I hadn’t even planned to dress up at all, then I put on that fabulous nose just for kicks, and when there was a leftover wig, I grabbed it too, on an impulse.

Trick-or-treating is a completely different thing in the U.S. than it is here in Europe (duh, you say) – the effort people make with their costumes, and the open house atmosphere, the general joy and goofiness is really heartwarming. One family installed a huge Zozobra in their front yard, complete with a gloom box. Whether they actually set fire to him, I don’t know, maybe that happened later on, but he was scary and beautiful even when he wasn’t burning! Anyway, I grabbed that wig on a last minute impulse, and ended up having great fun with my silverfoxy mane while strolling around the neighborhood chaperoning two young’uns on their quest for candy. 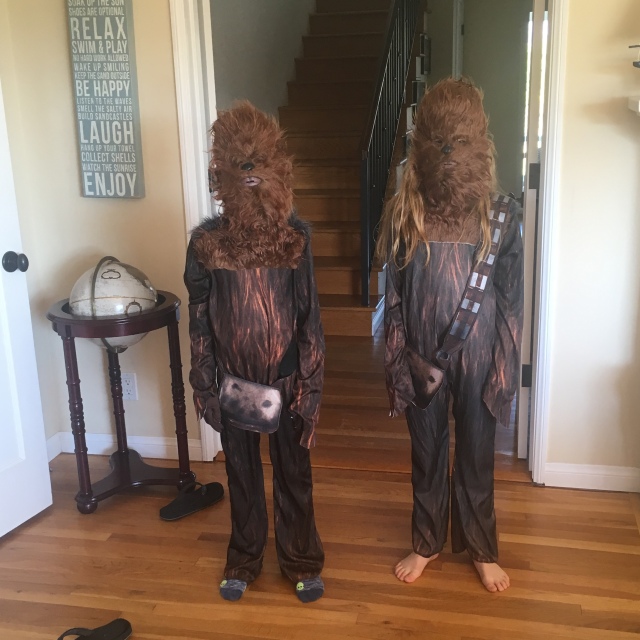 Here they are, dressed up as Chewbaccas, dubbed „The Wookie and his Cousin“ by the locals, and may I say they were very successful indeed and came home with _a lot_ of candy.

As you may have guessed, we spent the last two weeks of October with our folks in the States, in lovely Santa Barbara, CA. They were wonderful, generous hosts, and we had a great time, practically extending our summer by two weeks. Mostly, we did normal stuff (for there – obviously, the beach is usually not a part of our everyday city life here!). I wanted the kiddos to experience what their American family’s life is like. So we cooked, played games, grocery shopped, went to the farmers market, ate at their favorite burger, pizza and taco joints, enjoyed the year-round abundance of fresh (and tasty) fruit and vegetables, and of course we also stocked up on sunshine and spent as many hours as humanly possible by the always magnificent Pacific Ocean. My son surfed, my daughter and husband boogie-boarded. I tried it too, but got weirded out by the speed, man, those things can go fast! Absolutely not my bag. So I sat by the beach with my knitting, which of course is. So was walking Sully, my folks‘ supersonic Border Collie, caught here in repose – a rare occurrence with that gorgeous, hyper dog dude. On most other pics, all you see of him is a black and white flash. 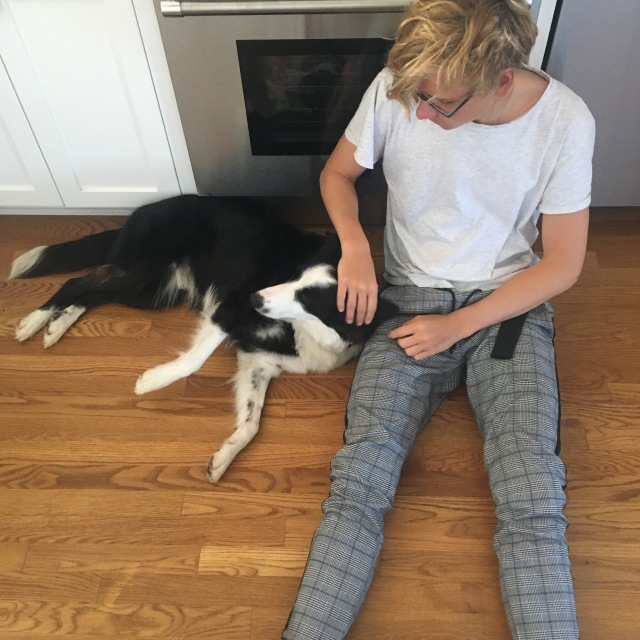 The day after we arrived, my daughter turned ten. It was her birthday wish to go whale watching, so we got on a boat and spent four hours admiring those gorgeous (if smelly) creatures who came really close, being amazed at the many graceful dolphins who came even closer, and commiserating with the locals about the ugly oil rigs the ugly government recently had installed all along the coast. The little princess also got her ears pierced in Santa Barbara, here she is with her new cute little glittery rainbow flowers. 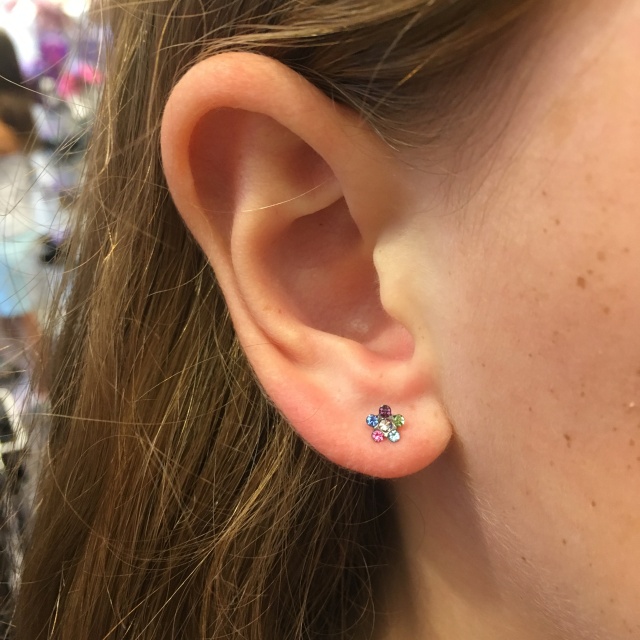 The second weekend, we took a memorable trip up to Yosemite. There is a great deal of hype going on about that place, and I admit I was a bit indifferent about going at first. Now, I’m so glad we went, because despite it being such a corny line I read in one of the brochures, Yosemite does change you. Walking through the forest, gazing up to the massive El Capitan and Half-Dome granite rocks and watching the sunset from Glacier Point was just as awe-inspiring as my visit to the grand Canyon decades ago had been. 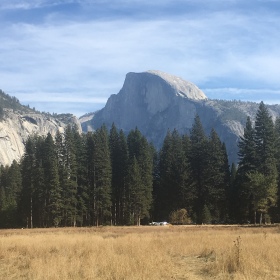 That said, my personal highlight was Mariposa Grove, hands down, walking in the presence of giants: the sequoias. 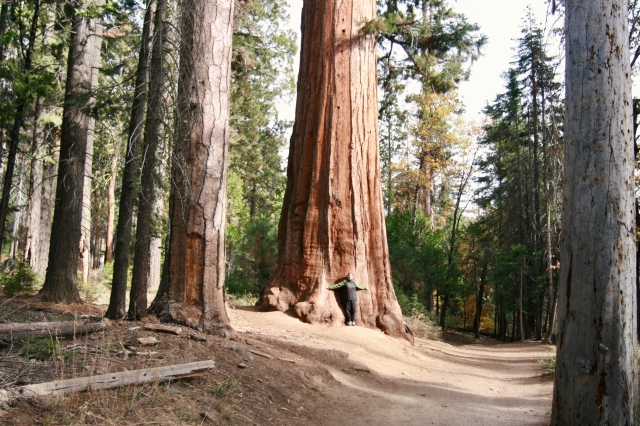 Some of them have been around for more than 2000 years, and they’re as tall as 25-story buildings. It’s hard to put into words what a quiet, commanding presence they have. They seem powerful and gentle, and unlike the rocks, I didn’t find them threatening. Much like you would in a cathedral or museum, we automatically spoke in hushed voices (little else but monosyllabic ‚wow’s, ’see that’s, and deep sighs), sat down every once in a while and soaked up the vibes of the ancient. It was a spiritual experience, and a happy, happy day for me. 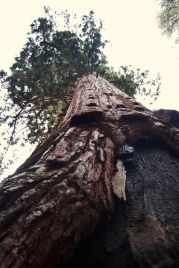 A good thing to remember on Thanksgiving – happy Turkey Day to those of you out there who are celebrating today :-).

Upon returning to Santa Barbara, we did a few more mundane things like shopping and walking Sully and spending every minute we could by the beach before heading back to LAX, taking the scenic 101 by the coast. Two days later that very highway was up in flames, so I’m calling that great timing. Our folks are not affected this time around, another thing to be thankful for.

Crocheting potholders that are both functional and cool looking (in my opinion anyway);

Crocheting adorable egg warmers, resurrecting a design I had already made a few years back, using natural fibers this time (never any other way again!).

Since my son’s class is in charge of the espresso bar this time, we obviously needed to make Cantuccini cookies in advance, their being vegan a nod to the classmates having chosen that lifestyle as much as a necessity, because the regular recipe was a disaster!

The Fayre’s day after tomorrow, so we’ll be doing little else the next two days. After that, there will be more work on ‚my‘ new book; I was asked to translate a romance novel by Amy Lane, and even though it’s very much a grown-up love story, most of it takes place in a (Californian ;-)) high school, so my young adults itch will be scratched too.

In case you were wondering what I was doing with myself all this time since my last post in late August, I was working, handling some school kerfuffle and doing more mom/little people stuff than usual. For the most part, I was editing the heck out of the cowboy novel manuscript I had due shortly before leaving for the States, which culminated in a week all by my lonesome out in our cottage, better to focus on the manuscript without having to deal with kids, household and school matters. I buckled down, and it was a very productive week indeed. Except for a stroll before sundown, I didn’t really leave the house. 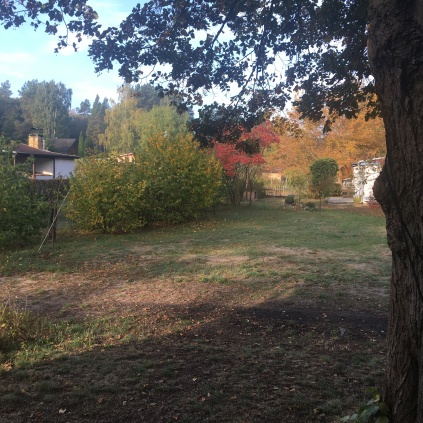 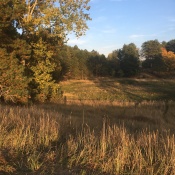 Manuscript submitted, we packed, bought gifts, organized cat-sitting and away we went – and the rest you know.

You guys in California, if you read this: thank you again. We miss you!