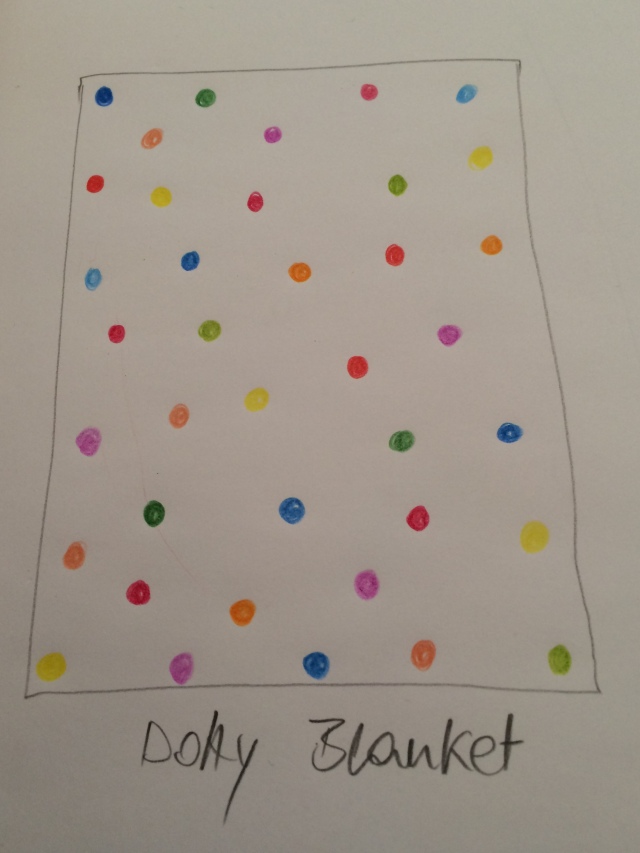 Scrolling down my photo library, I can see that I must have first gotten the idea for this blanket in March 2016, unbelievably long ago. It seemed like such a simple, straightforward design then! I love the little polka dot drawing I jotted down on my blotting pad so much that I cut it out after having scribbled all over the rest of the sheet, and kept the clipping. Now, I don’t design many patterns myself, usually I just see something somewhere and try to copy it as best I can, which is probably the reason for my being that attached to this one. Would you like to see how it turned out? Oh, please be interested, because I cannot wait to show you: 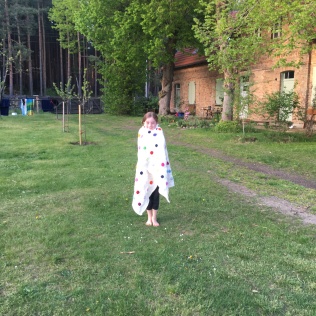 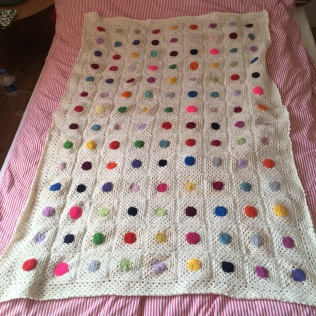 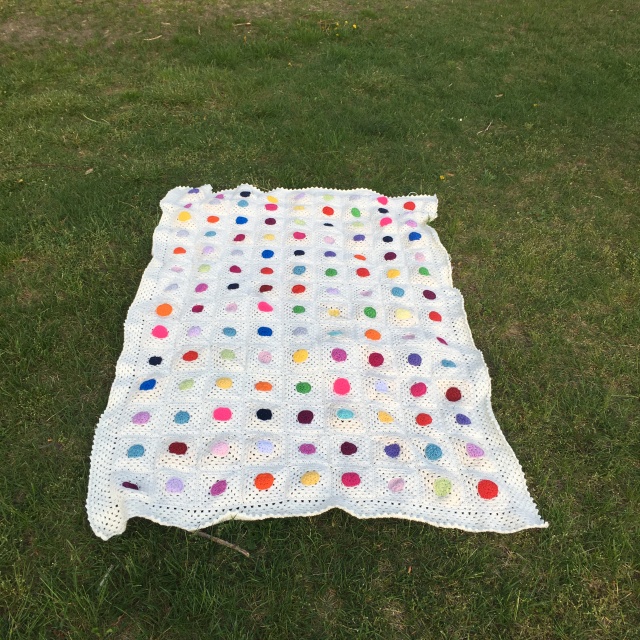 To me that is pretty much the loveliest little girl blanket I can think of, and I’m incredibly pleased with how the design turned out. Almost (but not quite) as importantly, my daughter loves it to pieces and is showing it to all her friends – can’t ask for higher praise than that, am I right?

So, in the beginning there was that drawing on my desk pad. Then there were the first few dots – made just like any Granny Square center, only that the first two rounds were the same color. 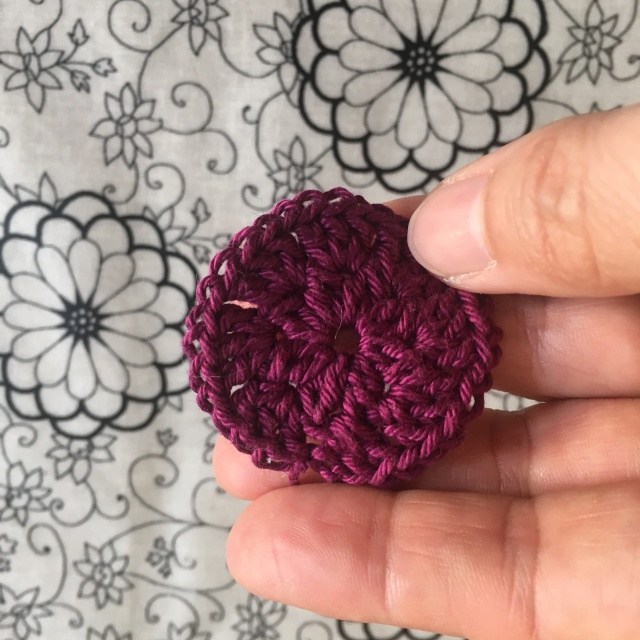 It’s entirely possible that there would have been an easier way to make the off-white square shapes, but I couldn’t really think of one, so I went with what I knew and crocheted simple Granny Squares.

I was very happy with how they looked, and went on to make more. Over time (and by time I mean over the course of roughly 2 years), I crocheted about 140 of these babies, 126 of which made it into the blanket. It turned out I had just too many pink ones in the end, and I have a small pile of leftover squares that will need to be dealt with eventually.

And then life happened, other things took precedence, and I didn’t even think about the Dotty Blanket for a long time. When I did look at the few measly squares I had done, and after a rough estimate of just how many of the darned things I needed for the blanket to be a reasonable size, I couldn’t even – so I put them away again. 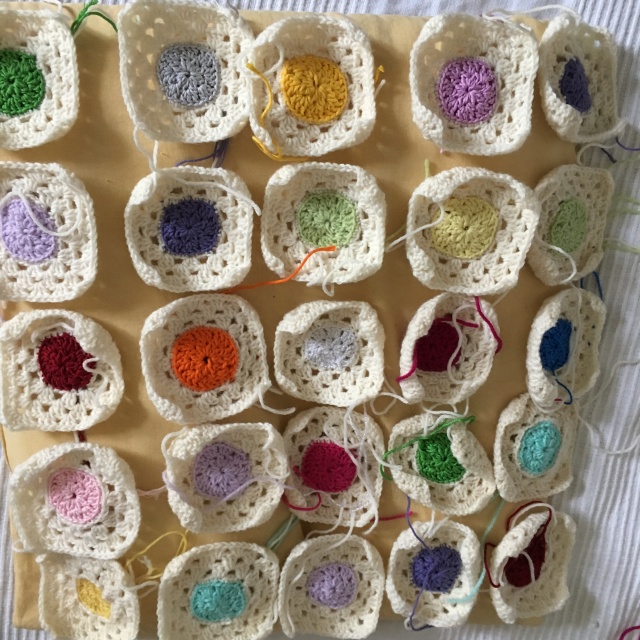 And then, finally last summer, I knew I was looking at a two days drive (as a passenger) to Brittany, and I chose making dots as a vehicular crochet project. At this point, I had gotten over myself and done the actual math; I realized the color scheme needed a certain symmetry of chance, if that makes sense. So I counted, and calculated, and ultimately figured out how many of each color there needed to be. I was off by only a few.

It was a bizarre two days in the car: my family were all wearing headphones and listening to their audio books, and I was doing my thing with the crochet hook, probably mostly meditating. It is a very repetitive motion, making those round centers. When we arrived at our destination, I had made about 100 dots, and was feeling pretty zen ;-)).

Then our cousin M. had a baby, and I decided to crochet her a baby blanket, so that’s what I mostly did by the beach, as well as on our drive back. By the way, the book my people were listening to was The Expanse – which is now out as a really awesome TV show on SyFy – to a Science Fiction geek, it doesn’t get much better than that. I’m having a great time watching that show with my squad :-). Two words: Shohree Aghdashloo!!!

Over the fall break in October, I took up making off-white squares again, and by November I had finished, and sat down with my daughter to determine the final color sequence. It took us the better part of a Sunday, and I actually taped the final arrangement with transparent packing tape so as not to upset the order. First the taped down makeshift blanket was actually stuck to the parquet, which, for a few most annoying weeks required cleaning around it. Before Christmas, I was forced to transfer it onto the clothes rack for the holidays – where it stayed until February, when I finally had time for the home stretch. 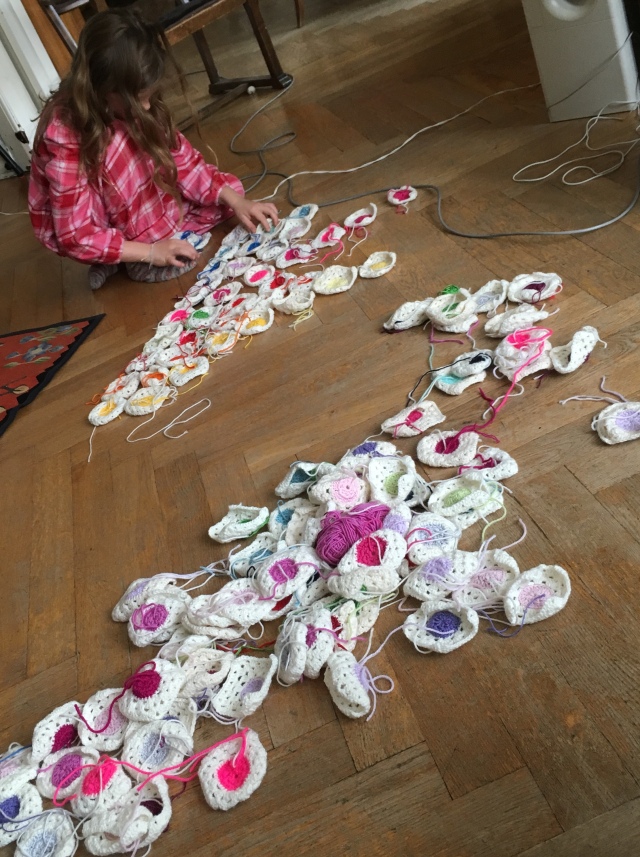 By now, the suspense of this post must be killing you (on the other hand, nobody forced you to come here and read, so you must be here by your own free will, right…?)

Maybe you’d like me to tell a joke in between. Here’s one I love: Why are ghosts such bad liars? Well…? Because you can see right through them! Hahaha, I bet that woke you up!

Where were we? Oh, right, in February I finally started the assembling process, crocheting the squares together with rows of SC. The result looked like this: 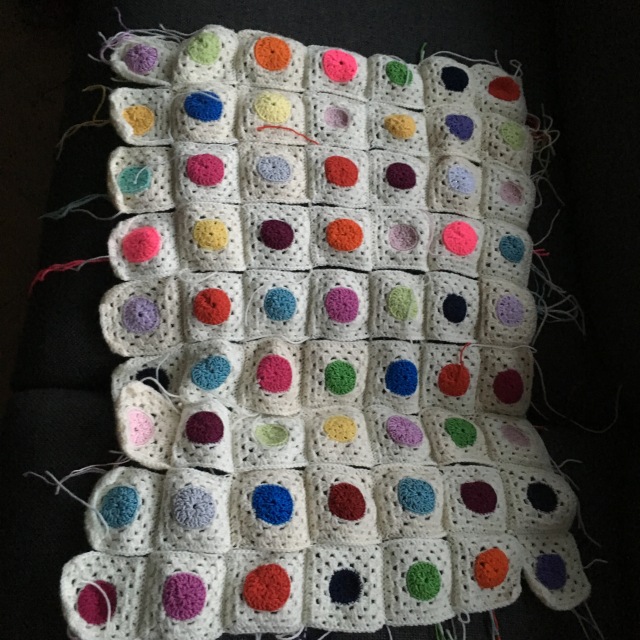 Pretty early on, I had a bad feeling about the proportions – they seemed a bit off (too little off-white in between the dots), but it was only when I realized the blanket would be way too small like this that I gnashed my teeth and ripped the SC back up, swearing a blue streak, and proceeded to add yet another, final off-white round to _every f…ing one_ of the damn squares.

Anyway, here’s what it looked like before darning in threads, of which there was an impressive amount, as you can imagine. My kitty loved sitting on it as long as they were there, probably hoping there would be mice popping out of it. 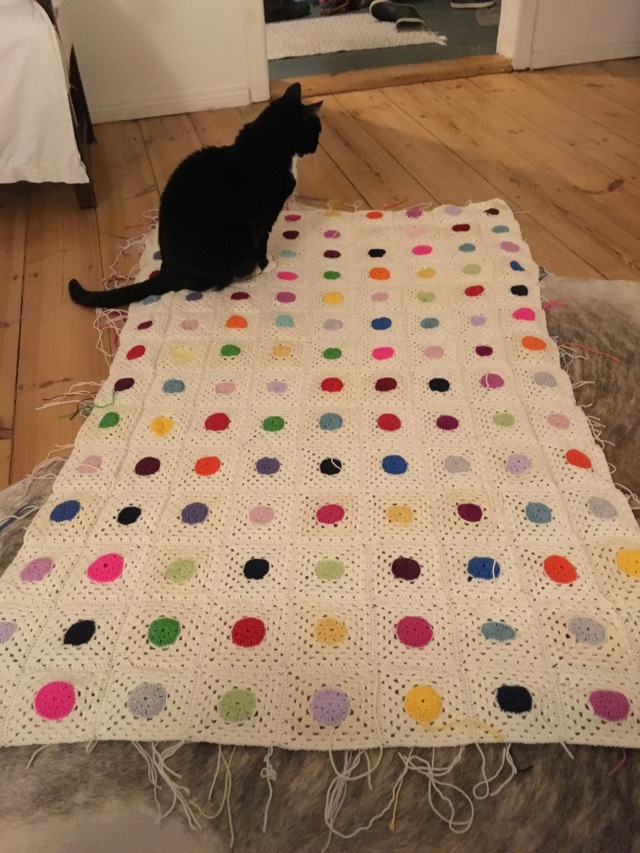 I even took a picture of the thread snippets after I was done, the pile was so impressive. 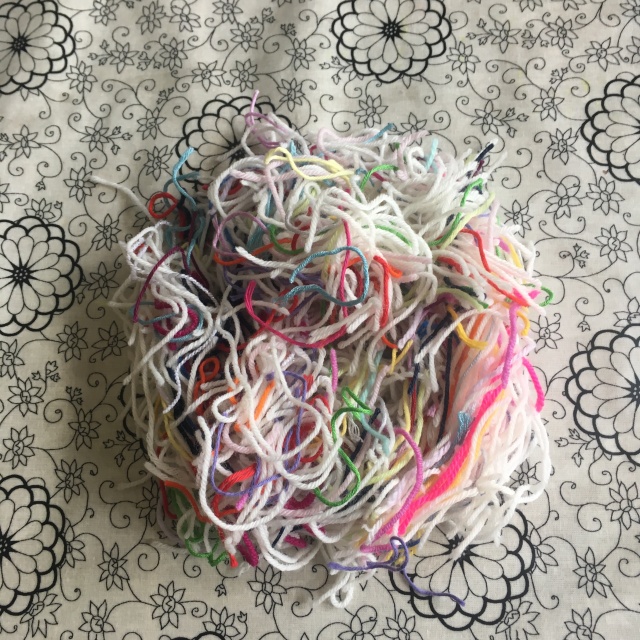 Finally, there was the important question of whether to do a border or not. I couldn’t really make up my mind, so I thought I’d just go ahead and see what it looked like, and then decide whether I liked it or not – by then, I’d become sort of cavalier about ripping things back up. I decided the edging needed to look like the rest of the off-white fabric, so I did rows of Granny clusters, like this: 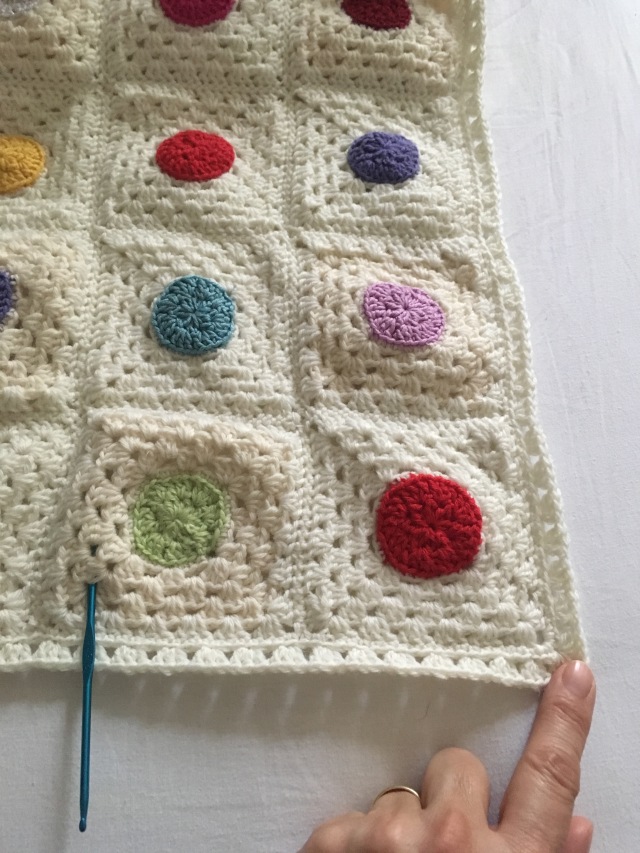 I just added row after row until I found the symmetry pleasing, and declared the blanket done – no, that’s actually not what happened. It was my sweet Princess N., la chefesse du design, who made that decision. Shukran, habibati. Soooo – let’s see two final pics, and then it’s a wrap for this post, and we can all breathe easy 🙂 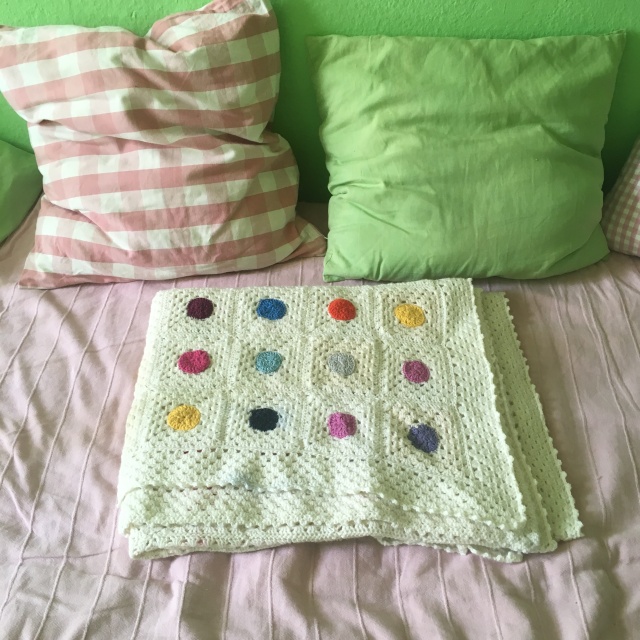 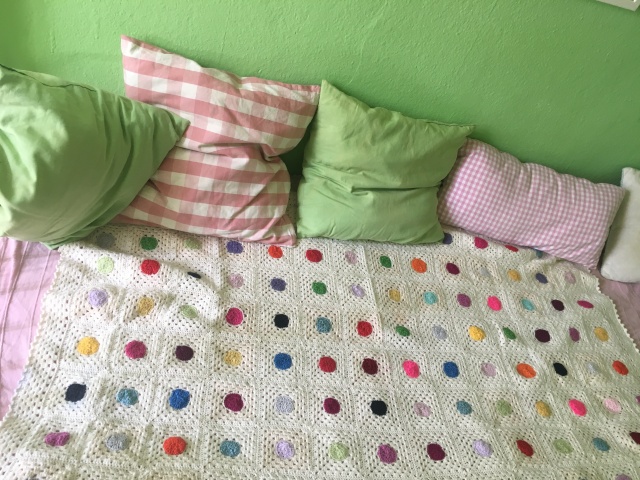 Thank you, dear stitch readers, for reading through this. I really appreciate your attention, as I’ve appreciated each and every one of you who gave me advice and encouraged me to keep going with this project – you know who you are. I love you guys!

This site uses Akismet to reduce spam. Learn how your comment data is processed.